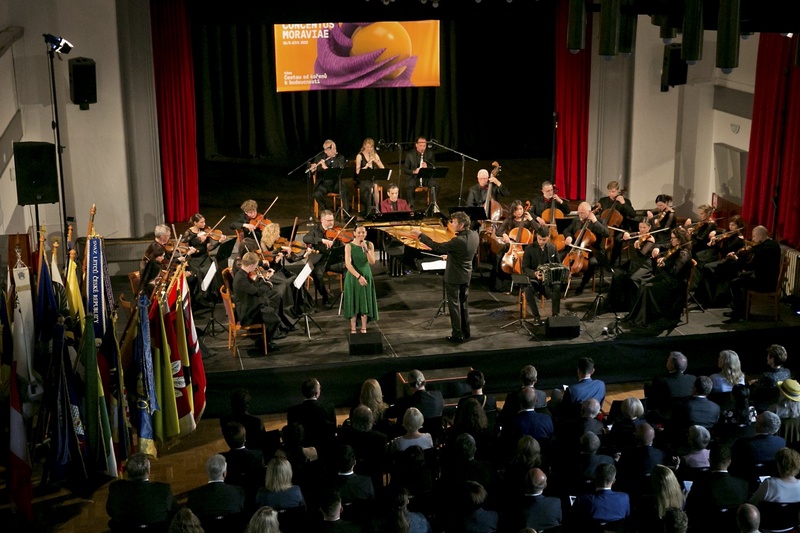 To the original article in Czech

Concentus Moraviae opens to the rhythm of the tango

Since its beginnings in the 1880s, the tango has worked its way up to become one of the best-known dance styles and enjoys great popularity not only in America but also on the old continent, taking many different forms during its existence. Die volkstümlichen Wurzeln und die zu Herzen gehenden Themen bleiben jedoch unverändert, ebenso wie die süßlich-traurige Wirkung auf die menschliche Seele. The evening opened with the sombre and melancholic Oblivion by one of the most famous creators of Argentinian music, Ástor Piazzolla, followed by the song Zaraza by Benjamin Alfonso Tagle Lara. Analia Selis’ singing was not only pleasantly bourgeois, natural and at times almost debauchedly chanson-like, but also superbly recorded – it is not often that the orchestra and the reproduced singing do not fit together ideally, and one fades at the expense of the other, or the result does not seem homogeneous enough. This was not the case at all in the opening concert of the Concentu Moraviae – the singer’s voice remained above the musicians, of course, but never so much that the precise work of the orchestra could not be heard. The connection between the orchestra and Analia Selis was very close, which was evident, for example, in Francisco Canara’s Se dice de mi or Carlos Gardel’s Por una cabeza with their pronounced changes of mood and tempo.

Analia Selis has an enormous variety of expression, and so not only the love ballads full of bitter brooding were convincing, but also the sly speech singing or the wild and fiery performance in the concluding Milonga de la Anunciación by Ástor Piazzolla. Their singing was more than successfully complemented by pianist Mariano Castro – be it the intimate, jazzy duet of piano and vocals in Héctor Stamponi’s waltz Flor de lino or the dance-like wild runs in Florindo Sassone’s Baldosa floja. A chapter of its own is the performance of bandoneonist Nicolás Velázquez, who absolutely shone in Ástor Piazzolla’s soulful Adiós Nonino and the lively dramatic Verano Porteño. He handled not only the initial delicacy but also the fast figurations and sharp incisions of the concluding Verano Porteño with interpretive ease and rhythmic precision.

The orchestral musicians under the direction of Kaspar Zehnder also offered a fine performance full of subtle nuances of expression to underline the seductive and melancholic mood of most of the songs. Often these were not sudden and sharp changes, but gradual dynamic or character changes resulting from the rhythm of the dance. It is also worth mentioning that the amplification in the form of clarinettist Lukáš Daňhel, flutist Petr Pomkla and oboist Anikó Kovarikné Hegedűs blended into the orchestra immediately and without the slightest difficulty, and the musicians gave the impression that they regularly perform with the Klaipėda Chamber Orchestra. It was also a very important addition to the ensemble, as it is the wind instruments that give the tangos, waltzes and milongas their unique colourful charm.

The opening concert of the 27th edition of Concent Moraviae was undoubtedly a success, presenting the audience – as is good festival custom – with a programme that artfully oscillated on the border between artistic and “popular” music while offering a captivating experience at a high performance level. Next month, this year’s theme – Journeys from Roots to Future – will take listeners to various forms of music from the present and the past, and it looks like the fusion of high culture and folk music in Kaspar Zehnder’s dramaturgical plan will be more than delicious.

Back to Archive
Journalists / Press