30 years of pure joy of playing in the luggage

The Bernese ensemble “mit vier” celebrates its thirtieth anniversary in October 2022 with a Tuscany tour, before concluding the anniversary tour in June 2023 in Basel, Bern and Biel with works by Swiss composers composed especially for the ensemble.

Two years later – Charlotte had meanwhile been in London, Kaspar in Paris – the same four accepted an invitation to Mauritius. Cyclone Hollanda, which swept over the island with the greatest force, caused some of the planned concerts to literally fall through, but there was plenty of time for socialising and playing skat. This is where the name of the ensemble comes from: anyone who can play his game “with four”, i.e. with all four jacks in his hand, has nothing to fear for its course.

Old languages as a unifying element
Johannes Bühler was the first to retire from the ensemble, Marc van Wijnkoop, Christian T. Schneider, Alexandra Iten each joined on cello for a time until Urs Fischer joined in 2003. Heinrich Forster handed over the viola to Dorothee Schmid in 2006.
The name remained, and today the ensemble “mit vier” is certainly one of the few or last quartets in the world whose members all studied Latin and Greek at grammar school.

Music as a reason to travel: performances all over Europe
Regular travelling, not only for concerts but always for holidays and cultural purposes, has done much for the team spirit. Mauritius was followed by several trips to London, Bavaria, the South of France, Sweden, Romania and consistently every two years to Tuscany. In Switzerland, the ensemble “mit vier” has performed year after year in smaller concert series and has traditionally given a concert in the Romanesque church of Bremgarten BE at the end of the season before the summer holidays. It has also performed with great regularity in benefit concerts for “Fragile Suisse”.

Concerts in the Jubilee Season 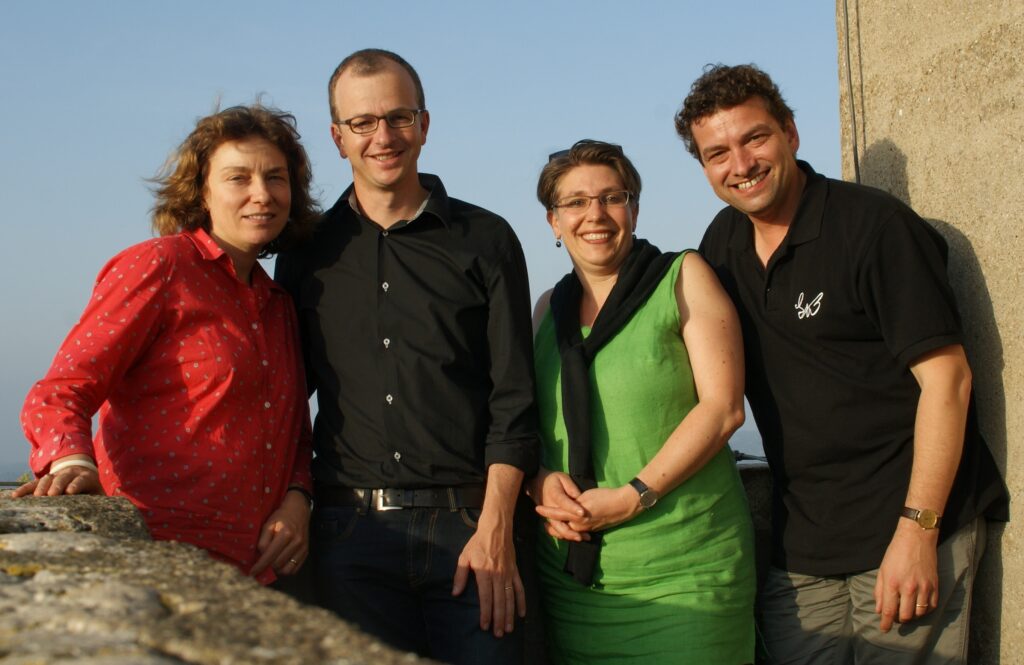