The Festival klangantrisch took place for the first time in 2015. The idea was born at a joint private cooking event: Peter Engeloch, a long-established Riggisberger with a long family tradition in the travel and passenger transport industry, and Thomas Marti, a newcomer to Riggisberg, thought about how the dreamy village of Riggisberg with a fantastic view of the Alps at the foot of the Gantrisch region in the Bernese Pre-Alps could be awakened from its slumber. The solution was literally obvious: if you Google Riggisberg personalities, Werner Abegg (1903-1984) and Kaspar Zehnder (*1970) are the two names that stand for culture.

Kaspar Zehnder in conversation with the specialist journalist Angela Kreis-Muzzulini

AKM Kaspar Zehnder: What made you decide to get involved with klangantrisch?

At the time of the request from Riggisberg, I was on the one hand successfully active in the region with the Murten Classics Festival and at the Zentrum Paul Klee, and on the other hand also internationally on the road as head of the Prague Philharmonia. However, my pre-Alpine origins have always remained very important to me. Part of my family still lives in Riggisberg.

In the extended circle, the concrete project “klangantrisch” was soon discussed in Riggisberg. My colleagues were probably primarily assuming that I would set up a classical music festival along the lines of Murten or Interlaken Classics. To me, a different concept seemed more attractive. As a boy who grew up in the village, I knew from experience the tension between the peripheral region and the center and believed I sensed what the needs of the village population were. So I proposed a locally anchored festival profile that would be supported by the village community.

What is special about the Festival klangantrisch?

The little village Riggisberg lies in the middle of the Gantrisch Nature Park, a region with spectacular scenery but little developed for tourism. Places worth mentioning on site and in the surrounding area are the Abegg Foundation, the churches of Riggisberg, Rüeggisberg and Kirchenthurnen, the ruins of the Rüeggisberg monastery, the Riggisberg Castle (today the Schlossgarten residential home). In our search for a larger venue, we gratefully accepted the offer of our co-initiator Peter Engeloch to convert his bus garage into a festival center. During the planning phase, we could not have known that Engeloch’s bus terminal would provide a concert hall that need not shy away from any comparisons, neither visually nor acoustically, but this is probably the bull’s eye with which we can trump artistically. Another special feature is the local anchoring, which is reflected in the circles of helpers, in the audience and in the list of supporting persons and institutions. We clearly have some catching up to do in terms of regional and national awareness, and we’re working on that. But I always think it’s important to start small and slowly grow bigger. Perhaps that is one of my original provincial characteristics.

What does klangantrisch mean to you personally?

I must say that rarely has a request pleased me as much as the initiative to build a cultural beacon in the place where I was born and raised. My ideas overflowed: musical walk, cultural animation on Saturday mornings in the village square, spontaneous, random intermingling of the village audience with local, regional, national and international musicians on the improvised stage of a truck trailer. By the way, these outdoor actions could be expanded relatively easily during the Corona pandemic and kept the flame burning at least minimally during the “culturally hostile” period. In collaboration with the Gantrisch Nature Park, we will continue to offer them from now on as selective seasonal actions at beautiful locations in the area.

What inspires you to create not a classical, but a crossover festival?

I have developed a personal focus in all my previous activities. In Murten, it was the familiar, traditional classical festival that took a closer look at a theme in 35 concerts. At the Zentrum Paul Klee, it was the interdisciplinary contemporary element based on visual arts and architecture that fascinated me. At the Biel Solothurn Symphony Orchestra, I learned a lot in the socio-cultural context. And at klangantrisch, I really wanted to try something new, so I ventured into a terrain that was completely foreign to me before: klangantrisch promotes the dialogue between classical and non-classical music, wants to break down fears of contact. The most important question is: Where is the border between art and commerce? We make art. And I personally would like to get to know artists from other musical genres and styles, as an enrichment of my own musical activity, which is primarily based in the classical field. That doesn’t always work, but surprisingly often.

As artistic director, how do you choose the acts and programs for the festival?

It’s primarily a question of the chemistry between the people involved, which has to be right. The mere fulfillment of submitted stage plans, to-do lists and technical riders doesn’t interest me at all. It’s no different when I move in a purely classical context: I’m not primarily interested in the agency that sells me a product, but in the person who stands behind the product artistically and creatively. For example, with Sina, Jaël, James Gruntz, Tinu Heiniger, Shirley Grimes, Trummer, Eliana Burki, we have had almost only ideal experiences so far. I regret very much that due to the pandemic it was no longer possible to hold the concert with the recently deceased artist Endo Anaconda; and I am very excited about Eliane Müller and SEVEN this year.

What is planned to secure the future of the festival?

In the classical field, I have always made sure that I invite people from my international network to whom the pronounced beauties of our nature, the heart and soul of our festival and the local people also mean so much that they unquestioningly accept the relatively modest conditions we can offer. We are very personal, familiar and close. The former tourist flagship of the region, the Grand-Hôtel Gurnigelbad, which was one of the largest and most famous hotels in Europe at the beginning of the 20th century (!), was unfortunately demolished in the 1950s. And also the smaller, but also very beautiful Schwefelbergbad has unfortunately been closed for years. For the tenth anniversary of klangantrisch we are planning to revive the history of the Gurnigelbad in the form of a musical. With this we want to lay the foundation for a new golden era of this fascinating region. By the way, this is also an idea formulated by Peter Engeloch, the transport entrepreneur from Riggisberg. He has knocked down open doors with me with this.

I can’t resist one last question: How did it come to this, in my opinion, unwieldy name klangantrisch. Wouldn’t it have been much more self-explanatory and easier to speak of a Gantrischklang festival?

In the region we would come with the name “Gantrischklang” too much into the enclosure of the folk music formations. klangantrisch is rather the consequence of klanGantrisch, but that takes time. We will more and more take the sounding projects tried out in Riggisberg out into the country, Jaël and the Kummerbuben have been invited with the same project not only to Montreux, but even to Lithuania. 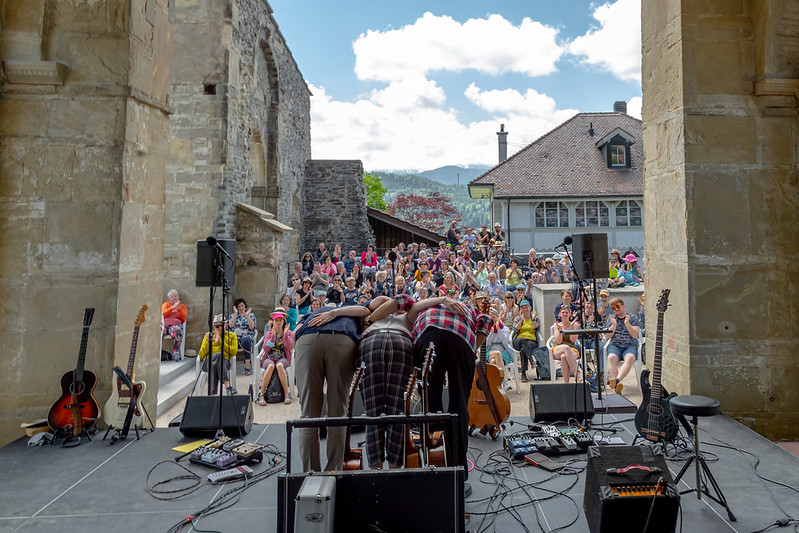 PrevJoseph Lauber – “This Is the Sound of the Alps”
Journalists / Press